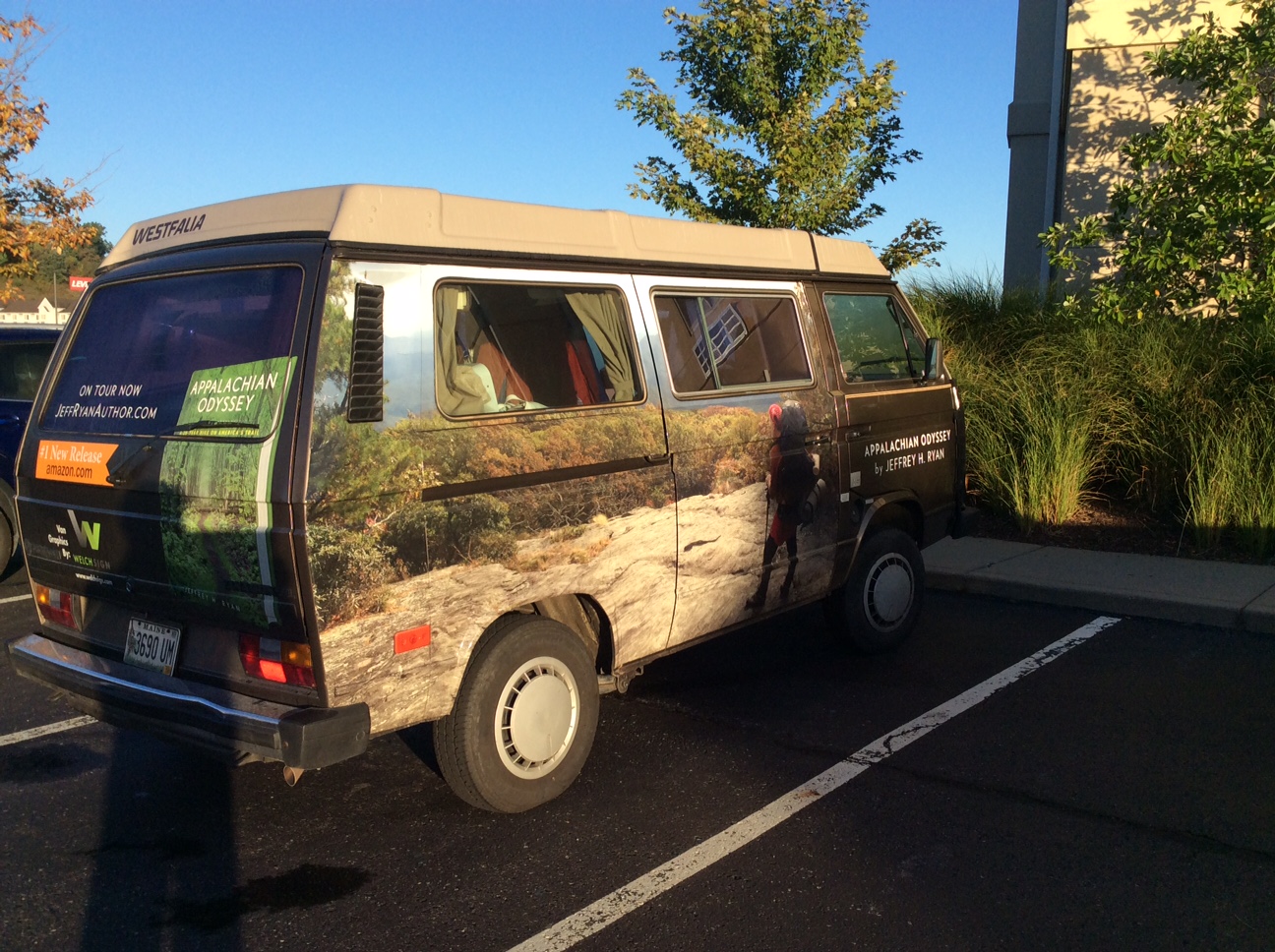 One of my favorite sentiments regarding travel comes from Steinbeck’s Travels with Charley – In Search of America. He contends that they sure way to ruin a journey is to think that you control it.

This is such a marvelous metaphor for every aspect of life — work and relationships come to mind— but one place that particularly requires you to let go of the tiller is when you are traveling.

Thousands of miles of walking have taught me to continually assess situations and adapt accordingly. I am most grateful for what that experience has added to my day-to-day living.

Before I left Maine last July for my several month book tour, I installed an auxiliary battery and inverter to my van. This ingenious set-up allows me to plug in my phone and other peripherals, so I never need to duck into a Starbucks, library, etc. to recharge along the way.

Things were working splendidly until somewhere in PA when the auxiliary batter ran out. (An integral part of the system is that the battery recharges from the alternator as I’m driving.) Because my book signing schedule was now daily, I didn’t have time to have someone take a look at at. (I had ruled out blown fuses as the problem, which was the best I could do.)

Everything figuratively blew up on me last Sunday. I was due for a book signing in Pittsburgh at 1:00. My phone was on fumes, so I tried to plug it in using my cigarette plug charger, which suddenly decided to become useless.I pulled over at a rest area and plugged the phone in for the few minutes I had to spare. According to Google Maps, my ETA at the signing was now 1:00. I had to leave with my phone at 14% charged. But before I did, I wrote the turn-by-turn directions on a piece of notebook paper and put it on the passenger seat.

That would have worked just fine if Google Maps directions had been accurate in the first place. Instead, I drove past the exit for the book signing, went right into downtown Pittsburgh (where there was a Pirates game and associated gridlock) and back out the other side. By now, it was 2:00 and my phone was long since dead. I couldn’t even call the store where I was due for the signing to tell them what was going on.

In full blown WTF mode, I pulled off the interstate and into the awaiting arms of a Holiday Inn Express. My staccato, Rain Man-esque banter likely terrified and amused the manager at the same time.

The next five minutes were astounding. She looked up the venue, realized she had turn-by-turn directions in her computer, printed them out, handed them to me and sent me on my way.

Half an hour later, I showed up at my signing a bit harried, but ever thankful for the woman that got me there.

Which led me to my next great find in Pittsburgh.

On Monday morning, I awoke as a man with a day off and a new mission — get the inverter fixed.

After a few calls, I found Murray Auto Electric in Delmont, PA. It was an hour away, but one of the best one hour driving decisions I’ve ever made. The staff there was incredibly busy (I estimate they worked on 15 cars and trucks while I was there), but they squeezed me in.

I figured it would be a while, so I walked the 1.5 miles to the Wagon Wheel Restaurant, another tremendous local find. I enjoyed sitting at the counter and chatting it up with the locals including Earl, the retiree and his buddy who are regular customers. You get a real feel for a town when you take the time to find places like the Wagon Wheel. And I never would have found it in the first place if my electrical system wasn’t on the fritz.

After my noisy walk back up Route 22 to Murray Auto Electric, my van hadn’t yet been taken inside. I pondered writing for a while, but did’t much feel like it. Instead, I watched the clouds, as an intense afternoon downpour shaped up. It started with incredible winds that hurled dust for a solid 10 minutes before the rain came in sheets. Then as suddenly as it all came on, the sun came out again. Just relaxing and being in the moment was the best thing I could do for myself, especially after several days of driving from one venue to the next.

As the perfect metaphor, my van emerged from the workshop into the sunlight. After the hellacious mental storm of the day before, when I had felt like a styrofoam cup blowing across a parking lot, not knowing when or how I would land, I was back in the land of reliable power and serenity.

Again I had learned that Steinbeck was right. I am not in control of my journey. I can chart the course in general directions, but should never hold the reigns too tightly. For when I’m open to the unexpected is when I find the most satisfaction and joy.