One that retires from society and lives in solitude especially for religious reasons. — Merriam-Webster Dictionary Because I wrote a book about a hermit, I get asked a lot about hermits and their lifestyles. I freely admit that I’m intrigued by hermits, but not obsessed by them (although I do enjoy more than my share of solitude). I’m also asked about why I named my book about Jim Whyte “Hermit”, when Whyte left his cabin to shop in town, for example. The following three Maine hermit stories offer some perspective on these questions.  When I use the term, “hermit” I consider the definition above, but also a point made by Michael Finkel in his book about Maine’s North Pond Hermit — that even the most famous examples of who we think about as hermits, were ultimately connected with society, some to a large degree. Henry David Thoreau, who chose to live deliberately in his hand-made cabin at Walden Pond walked to his mother’s house to dine on Saturday nights. Ray Phillips, who lived with his sheep on Manana Island, frequently rowed across the small harbor to the general store and entertained intrigued visitors from around the world. And the most celebrated hermit of them all, Christopher Knight (aka the North Pond Hermit) who spoke to one person in 27 years, set up camp where he could observe the comings and goings of his neighbors and when caught, knew who the Kardashians were — thanks to his FM radio that pulled in Maine’s largest TV station over the airwaves. He also committed 1,000 burglaries to stay fed, which represents a personal connection with society that many residents on the shores of North Pond prefer to forget. If we define a hermit as someone who has no contact with society, we’re hard-pressed to name a single one. But, if we relax our definition to include those who retire from society with an intention to retain as much solitude as practicable, we suddenly discover a host of fascinating characters, three of whom practiced their trade in my own backyard.

Ray Phillips — The Hermit of Manana 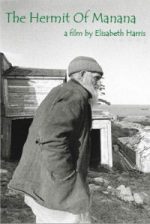 In 1930, Ray Phillips left New York City in a sloop bound for parts north and yet unknown. He landed on Manana Island, a small, rocky isle just a few hundred years across a harbor from Monhegan Island. After spending his first winter on his boat, he bought 1/12 of the island with the intention of making it his permanent home. For the next 40 years, Ray lived with his flocks of sheep and a few birds in a shack he built mostly from driftwood and other materials that washed up on shore, as well as donated windows and other amenities given to him by folks on neighboring Monhegan. As mentioned above, Ray preferred a life of solitude, but he did not shun visitors. In fact, toward the end of his life, he became a bit of a media sensation. However, when Ray tired of visitors, he would start “speaking in sheep”, to drive them away. Ray died in 1975 shortly after an episode in which his hands froze to his set of oars, speeding his decline.

A story so intriguing, it became a NY Times Bestseller. The only hermit of the three I cover here who was born and raised in Maine, Christopher Knight never felt like he quite fit in with the things his peers were doing. From an early age, he began thinking about stepping away from the rat race. After a brief stint at a “real job” in Massachusetts, Knight first drove to Florida, then north to the wilds of Maine. Somewhere near Moosehead Lake, he drove his car until the logging roads petered out and his car was literally swallowed up by the woods. (During the entire 27 years he was living as a hermit, his car was never found.)  Knight walked through the woods for days until he found the perfect site for his camp, near the shores of North Pond in the vicinity of Rome, Maine. He subsided mostly by stealing food, batteries and propane cylinders and camping supplies from nearby seasonal homes (know as “camps” by native Mainers). Knight bulked up on food supplies until the snow fell, then stayed at his camp all winter, so he couldn’t be tracked. He was finally caught via a motion-sensing camera while he was stealing food from a boy’s camp. His story, filled with astounding questions and paradoxes, is worth the read.

Like Ray Phillips, Jim Whyte came to Maine from New York City in search of a new life (and, in his case, a new identity). Whyte had also apparently tired from living a busy life that had taken him around the world and out of America for fifteen years. But Whyte had secrets. Many secrets. For one, he was the 1900 equivalent of a millionaire. He bought the first passenger car north of Portland (Maine’s largest city) for $3,000 cash in 1910. However, instead of traveling or otherwise spending his fortune, he holed up in a cabin with his wife, Tessa, instead. In the 1920s, Whyte lost all of his money. Tessa left him, too. Then, as suddenly as the bad luck had descended on him, he made his money back and then some. When he died in 1933, he left $40,000 in gold buried in the ground.
Tagged Hermit of Manana IslandMaine hermitsMonson hermitNorth Pond Hermitwhat is a hermit