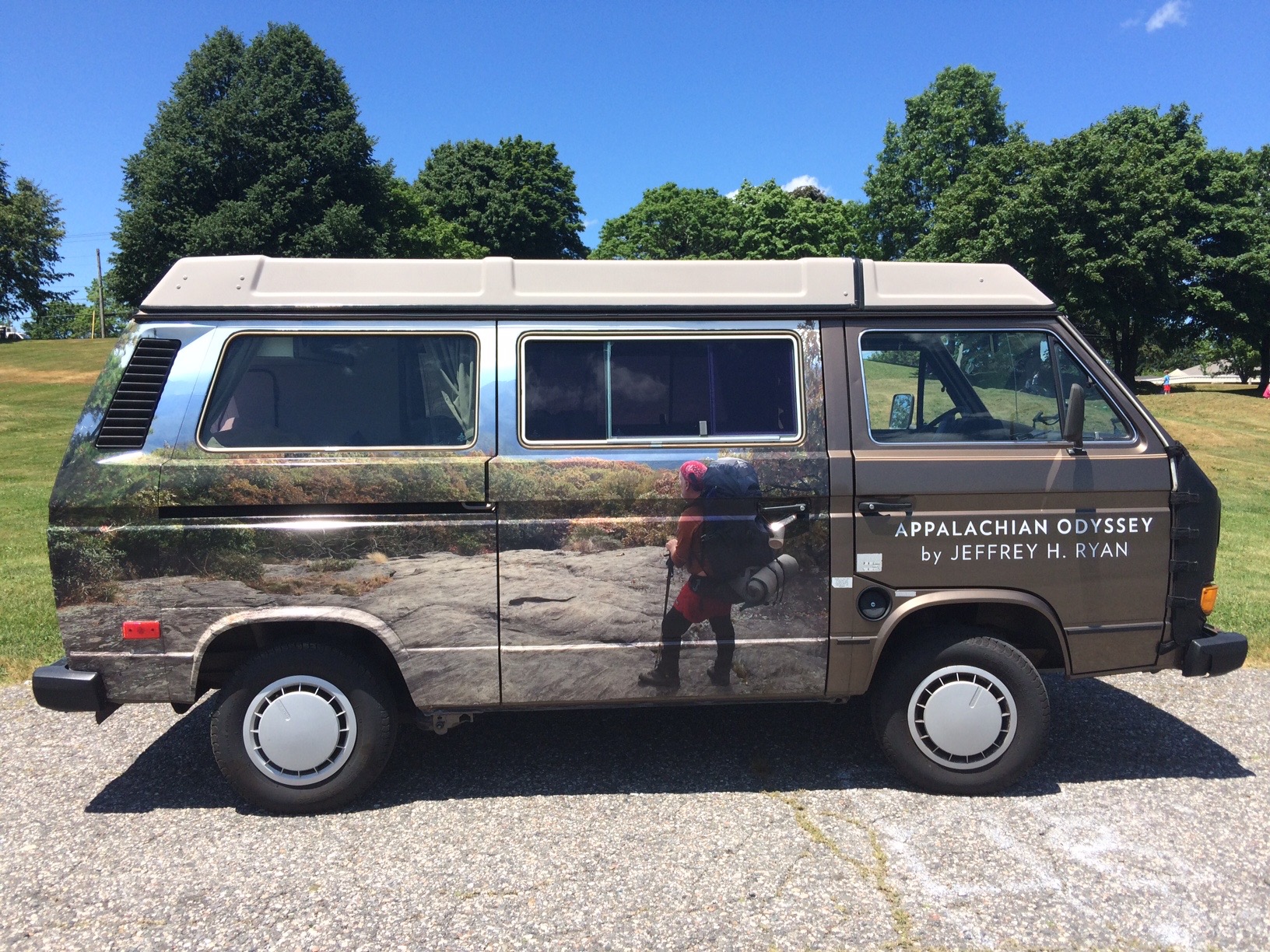 PORTLAND, Maine – Jeffrey Ryan, author, speaker, photographer, avid hiker and former catalog writer at L.L. Bean, will be embarking on a five-month book tour in his 1985 VW Vanagon. Ryan is the author of a new book about the Appalachian Trail that highlights a 28-year trip, hiked one section at a time. APPALACHIAN ODYSSEY encourages readers to set goals, chase dreams and achieve them one step at a time.

To kick off his book tour adventure, Ryan held a book launch luncheon on June 29 at the Press Hotel in Portland. Friends, family and local media attended the event for book signings and Ryan gave a brief presentation. From Portland, Ryan will travel to Washington, D.C., where he will be having a book signing event at the Thos. Moser showroom on July 12, as well as signing books at the National Museum of American History (Smithsonian), July 13 and 14. From there, Ryan will be traveling along the Appalachian Trail, speaking and signing books at several venues.

His tour will also include signings and speaking engagements at additional bookstores and more than 30 L.L. Bean stores from Maine to Colorado. So people can follow along on his tour, Ryan will be updating his book tour and social media accounts daily from the road.

Ryan was born and raised in Maine, where he grew up exploring the inlets and islands off the Maine coast. As an adult, Ryan adopted hiking as his favorite mode of exploration. In 1983, he went on his first long-distance hike, a six and half month adventure on the Pacific Crest Trail (PCT). Upon his return to Maine from the PCT, Ryan climbed Maine’s highest 50 mountains in one year. In 1985, Ryan’s friend, Wayne Cyr, joined him for a one-day hike on the Appalachian Trail that inadvertently began their 28-year adventure.

APPALACHIAN ODYSSEY lays out the tools needed to set a goal and achieve it. Ryan, author of APPALACHIAN ODYSSEY, said, “I was inspired to write this book because I came to realize that it doesn’t require taking giant leaps of faith to achieve life – changing goals – that setting long-term goals and moving toward them literally one step at a time can be as life changing and meaningful-probably more so… I’m really looking forward to my APPALACHIAN ODYSSEY road trip because it’s really a continuation of the journey.”

APPALACHIAN ODYSSEY is a memoir, outlining the Appalachian Trail trek and the lessons he learned throughout. Modeled loosely on Chaucer’s Canterbury Tales, Ryan treats each section as a self-contained story. It is a highly entertaining read that touches on the trail’s history and the mental aspects of doing the trail. More than 75 color photos offer additional inspiration. APPALACHIAN ODYSSEY is a great read for those who dream of doing the trail or want to experience the hike without having to shoulder a pack.

APPALACHIAN ODYSSEY, published by Down East Books, is now available in print at many local bookstores and online at Amazon.com, Barnes & Noble and Books-a-Million.