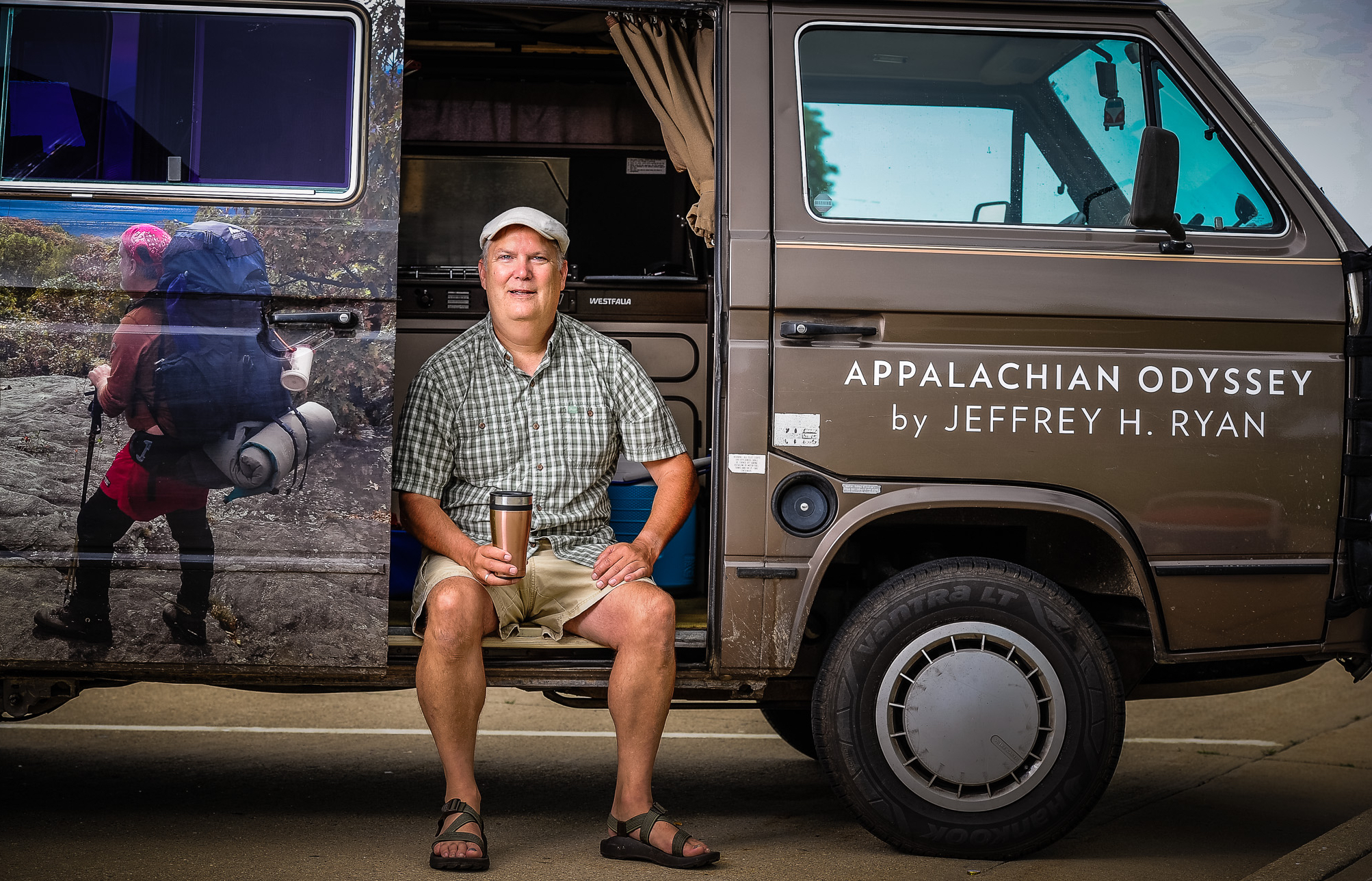 Thank you, Tony Eames for the opportunity to interview with the NF Reads website. I enjoyed doing it!

Please introduce yourself and your book(s)!

My name is Jeffrey Ryan. I was fortunate enough to grow up in the great state of Maine, where the Atlantic Ocean, offshore islands, inland lakes and the northern-most stretch of the Appalachian Trail were within a few hour’s reach. I am eternally grateful that my parents had the foresight to raise a family with Mother Nature as their assistant. I can’t imagine how things would have turned out otherwise.

What is/are the story(ies) behind your book(s)?

It comes as no surprise to those who grew up with me that I became an adventurer and a writer. At first, the two were exclusive of each other, but they finally melded into one satisfying career with the 2016 publication of my first book, Appalachian Odyssey, A 28-year hike on America’s trail. As you may deduce from the title, the book is about how a friend and I spent almost three decades poking away at sections of the 2,100-mile trail until we completed it in 1985.

The success of Appalachian Odyssey led me to write another book about the legendary trail. This time I delved into how the idea for the trail was cooked up in 1921 and how one man single-handedly saw it to completion. That book, Blazing Ahead: Benton MacKaye, Myron Avery and the Rivalry that Built the Appalachian Trail, was published in 2017.

I spent most of two years touring America in support of the two books. At one point I had 29 appearances in one month. As you might imagine, I needed to recharge my batteries before taking on another large project—but it wasn’t for long. In the autumn of 2018, I began writing my latest book about a mysterious man that lived in rural Maine from the 1890s to the 1930s. By all appearances, the man was a hermit, but he was actually sneaking down to New York City with regularity to live a secret life. That book should be out by late spring. Please sign up for my newsletter for updates.

I spend a lot of time walking. (In addition to the Appalachian Trail, I’ve hiked several thousand additional miles.) While I walk, I work out ideas for characters, come up with topics for blog posts or take a break from writing completely to jumpstart my creativity when I get back from my trip. Even when I can’t squeeze in a walk, I make sure to spend a few minutes a day observing or being in nature. I notice that my writing loses something when I spend too many days in a row at the computer without getting outside.

How do you deal with creative block?

If I hit a stumbling block in one of my books, it tells me that I haven’t hit the right solution yet. Rather than trying to force an outcome, I set the project aside and work on other projects, like reaching out to venues to schedule events, writing a blog post, sending invoices or whatever. Inevitably, the solution to my stumbling block appears when it’s ready. Then I can proceed.

What are the biggest mistakes you can make in a book?

Not giving yourself enough time for review and revision cycles. As difficult as it is, I need to let my “completed” manuscript sit for a few weeks before I’m able to read it with a critical eye again. I’ve caught so many clunky sentences that needed rewriting, silly typos that didn’t get caught by spellcheck and other things that slip by when you “read what you want to see as opposed to what’s actually on the page.” I’ve also strengthened dialog and details that I might have let go if I was too focused on the deadline.

Do you have tips on choosing titles and covers?

I’m really lucky in that regard. I spent more than a decade writing outdoor gear and clothing catalogs. I had a ton of data available including how customers reacted when I changed a headline, product name or product story. I also learned a lot about photography. The two things that always failed were when photos were too cluttered or when headlines were “too clever.” If people need to work to decipher what they’re looking at or read something twice to figure it out, you lose the sale.

The same is true of book covers. A simply designed cover will stand out on the bookstore shelves and draw people in no matter if they’re viewing it in a store or online. A simple title that gets to the point has an equal benefit. That’s why so many book titles begin with an evocative word or two followed by a subhead that is more descriptive of what the story is about. It works!

How do bad reviews and negative feedback affect you and how do you deal with them?

Bad reviews are going to happen. I try to learn from them. It’s not my job to make everyone happy with my writing. I hope that people are. But if someone reacts negatively, I take in what they say, consider how it might help me in the future, then move on. The big thing for me is to remain objective. I have a friend that went to art school. She’d routinely have to create work, then have it critiqued by professors and peers. One of her professors once said that when someone critiques your work, they are responding to the work, not you as a person. I always took that advice to heart. It helps take your ego out of the equation.

How has your creation process improved over time?

The creative process has been completely different for each of my books. I find that really interesting. My first book was a memoir. I structured it as 28 short stories, each representing one of the 28 trips it took for us to complete the Appalachian Trail. That said, I wanted to make sure that some themes came up from time to time, so the book held together as a whole. I think it worked. At least that’s what I’m told.

My second book was historical nonfiction. It was heavily researched and a complete divergence for so many reasons. I needed to be on top of my sources and documentation all the way through. I also had the luxury of having three editors – one focused on sentence structure and meaning, the second on grammatical aspects, and the third on the citations and fact-checking. I was so fortunate to have had them along for the ride.

My third book is a historical novel. I had a lot of fun writing it. I had the advantage of historical research to help structure the story, but I was free to create the supporting characters. It is something I’d do again in an instant and may do for my next book because it plays to the realms of both history and imagination.

What were the best, worst and most surprising things you encountered during the entire process of completing your book(s)?

The best, hands down, is meeting readers in person. I enjoy doing signings and lectures and talking to folks about the subjects of my books. To have an 85-year-old man walk up to you and say with a twinkle in his eye that he hiked part of the Appalachian Trail through Pennsylvania in the 1940s, for example, is something you never forget. To know that your writing connects or reconnects subjects with people is so rewarding.

The worst thing I’ve encountered was sending my first book to the publisher to discover a few days later that I left a chapter out. I subsequently discovered why. It was the only trip in 28 years that I didn’t write about in my trail journal. Fortunately, my hiking buddy, Wayne, came to the rescue. He had taken notes on that trip and gave me a summary. Thankfully, it was enough to bring the whole trip back to me. I was able to write about it and resubmit it before the publisher started laying the book out — phew.

The most surprising thing I encountered was learning things from the characters I created for my latest book. There would be days when the characters would lead me to create scenes I hadn’t envisioned before I sat down. For example, my lead character, Ben Harmon, decided to visit a graveyard where he made a discovery that was central to the story. I initially sat down to write about him going somewhere else entirely. But when he turned the key to start the car, I found him taking me to the cemetery. It was neat.

Do you tend towards personal satisfaction or aim to serve your readers? Do you balance the two and how?

Wow, are these great questions! I feel that my first job is to be the best storyteller I can be. If I’ve done my work, I’m letting the reader in on a great story I’ve found, one they want to hear and tell others about. If I can accomplish that, I’ll be personally satisfied—greatly so.

What role do emotions play in creativity?

Emotions play a great role in how I approach my writing. For Appalachian Odyssey, I wanted people to feel like they were hiking along with me. To do that, I needed to share my emotional state. Some days you feel amazing and the miles seem to fly by. On others, you struggle mightily to find a groove. It’s all part of the trip. If I couldn’t share what that was like, the book would have fallen flat.

Similarly, in my hermit book, I drew on personal experiences to give the handful of lead characters the credibility and depth that would make readers care about them. When I shared the manuscript with a friend, the first thing she said was, “After I read it, I felt like the people in your book were my friends.” That made me happy and gave me permission to stop reworking sections. It was a gratifying milestone in my writing career.

Do you have any creativity tricks?

Yes. I procrastinate. There are days that I don’t do any creative writing and focus on other projects. I treat my creative writing as a main course. I can dabble around with other things, but eventually I have to make the thing the guests are coming for. Something happens when I tell myself, “OK, you’ve done x,y, and z, now you have to sit down and work on a chapter.”

What are your plans for future books?

When I happened upon the 1934 newspaper article about the hermit, I immediately knew I would be writing the book. The story was too compelling. I am inquisitive by nature. I have zero doubts that I will have another story tap me on the shoulder and say, “write me.”

Tell us some quirky facts about yourself.