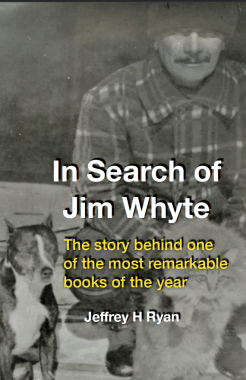 In Search of Jim Whyte

I ran across a reference to "the mysterious Jim Whyte of Monson, Maine" while researching another book I was working on. There were references to a secret past, great wealth, world travels and more. As you can imagine, that piqued my interest and it wasn't long before Jim Whyte took me on a great adventure into the rural Maine landscape of the past and present.

Order Now!
About the Book

In 1895, Jim Whyte arrived in the slate mining town of Monson, Maine with sacks full of money and a fierce desire to be alone. What was he hiding from? Over the years, even the FBI wanted to know.

But I found out.

This Maine hermit holed up in a cabin he built high upon a ridge. He even designed window shutters that allowed him to look out, while preventing people from seeing in. Over the years, this self-styled recluse and his wife, Tessa made a few friends in town and secrets started leaking out.

Whyte had run away from the family home in New York City when he was just sixteen. He joined the German navy, became a pearl diver, traveled the world and learned how to speak six languages fluently. He told fantastic stories about his adventures, but kept his private life to himself.

Based on the true story, my book, Hermit: The Mysterious Life of Jim Whyte holds many of the answers (see my Amazon page to learn more about that book)

This book, In Search of Jim Whyte, tells the story behind that book — how I discovered the remarkable tale of Jim Whyte in the first place and how I set about writing my most popular book to date.