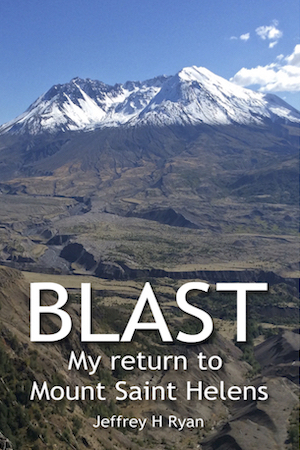 Thirty years after he first climbed it and 37 years since the volcanic blast, the author returns to the storied mountain to discover a reinvigorated landscape

Adventurer and author Jeffrey Ryan first climbed Mount St. Helens in 1987—just seven years after the epic blast that changed the Northwest's landscape forever. Intrigued by what he might find thirty years later, he returned in the autumn of 2017 to climb the mountain again. He also spent several days hiking into ground zero of the blast zone and exploring the backcountry to witness the amazing regeneration taking place in grand and subtle ways.

Ryan's narrative is accompanied by beautiful photos showing the transformation of the area and Mother Nature's ability to bounce back. It also includes tips for visiting and hiking in the Mount St. Helens National Volcanic Monument.

Order Now!
About the Book

On May 18, 1980, Mount St. Helens erupted with fury. Triggered by the largest landslide ever recorded, a devastating lateral blast blew off the entire northern side of the volcano. Searing hot gasses, traveling at 650 miles per hour, scorched trees nearly twenty miles away. The mountain instantly lost 1300′ in elevation. A slurry of mud, ash and melting ice inundated the landscape, which was then buried in 540 million tons of ash, and fifty-seven people lost their lives.

In 1987, just seven years after the historic eruption and the first year climbers were allowed back on the mountain, Jeffrey Ryan ascended Mount St. Helens. In 2017, he went back to climb it again and to explore the areas affected by the eruption. “Blast” is the first-hand account of what he observed during the hard-charging mountaineering days of his 30s and, most poignantly, what he saw through the eyes of a well-seasoned hiker with thousands of miles under his feet.

Many thought that the scars of the eruption might never heal, and some are still vivid to be sure. But the mountain and surrounding ridges and valleys have rebounded at an inspiring rate. Ryan takes us along with him deep into the blast zone, onto the mountain’s summit and into the backcountry, where the recovery of the area is most vivid and affirming.