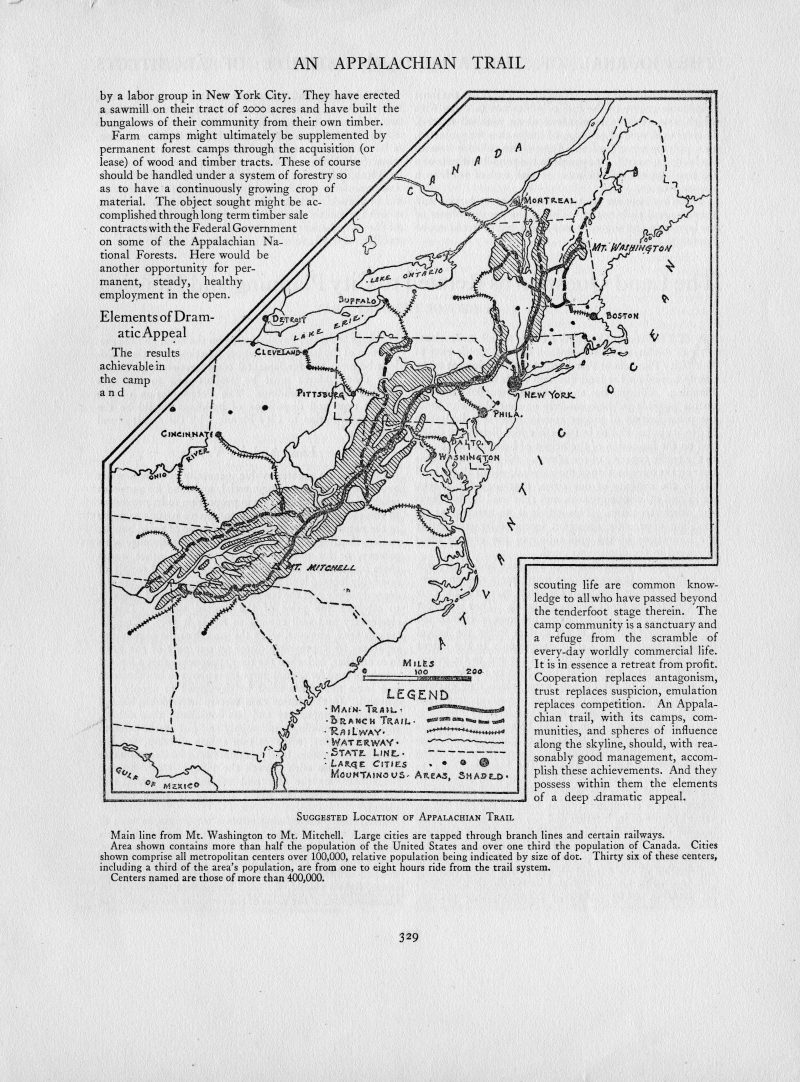 The year was 1921. A 42-year-old forester and land use planner named Benton MacKaye came up with a remarkable, progressive idea — to build a super trail that would travel across a dozen states, from Mount Mitchell in Tennessee to Mount Washington in New Hampshire. He pitched the idea to a friend, who happened to be the editor of the Journal of the American Institute of Architects. That October, the idea was presented to the world in MacKaye’s article, An Appalachian Trail: A Project in Regional Planning.

While the trail indeed came into being, what has been largely lost to the ages is the fact that the Trail was only one aspect of a much larger plan. MacKaye envisioned the AT as the crown jewel of a project that would create and support communities. The inhabitants of the villages would maintain the Trail, provide accommodations to hikers and grow food to support both the hikers and village inhabitants. But spurred in part by the map MacKaye had drawn for the article, it was the Trail that grabbed the public’s imagination.

Like most start-up projects, periods of uncertainty marked the early years. Fortunately, some of the elements for getting the Trail off to a strong start were already in place. Trails and the clubs that maintained them already existed in New York and New Hampshire. Sections were quickly identified and renamed as the first sections of the Appalachian Trail. Then things slowed down.

For a variety of reasons the AT project stagnated for a few years. The visionary, Benton MacKaye, became interested in ancillary projects both because they interested him and because they paid him enough money to stay solvent. He was also not well suited for the block and tackle work that needed to occur for the Trail to be built.

By 1928, a twenty-nine year old from Maine emerged to lead the charge in building the Appalachian Trail. Over the next twenty plus years, Myron Avery poured enormous energy into every facet of the trail — where it would go, how it would be built and marked, how it would be promoted and much, much more. He was the first to hike 2,000 miles on the Trail. He wrote the guidebooks. He oversaw the creation of the maps. He founded or controlled the boards of four trail organizations. Under Avery’s leadership, the AT was completed in a remarkably short nine years.

It would be wonderful to say that MacKaye and Avery understood their strengths and limitations, collaborated famously because of this and went on to celebrate the rare achievement of turning a vision into a reality together — perhaps on the summit of a far flung peak overlooking their handiwork. But it wasn’t to be.

Professional convictions and personal styles ensured that “The Father of the AT” and the force behind every facet of getting the trail built would rarely communicate until one important difference of opinion forced a messy parting of ways.

Why MacKaye and Avery never spoke again is an issue too dynamic to sufficiently cover in one blog post, but I can say that the lessons inherent in the 1921 start-up known as the Appalachian Trail are just as applicable to any present day business that is trying to get off the ground.

The 1921 start-up known as the Appalachian Trail came to be, but only partly in the ways Benton MacKaye envisioned it. In some instances, MacKaye was too progressive for most people’s tastes. (For example, the Trail never spawned communal villages in its shadow where people could earn a living, but the federal government would hold permanent title to the land.) MacKaye’s vision also sought to solve a problem of the day that quickly evaporated. (When he first conceived the Trail, people were forsaking the country for the city. MacKaye’s communal villages and farms were an attempt to entice people back.) The rise of the automobile culture literally drove people back out into rural areas to explore. Tourism now became a major rural employer, with hotels, restaurants and gas stations leading the charge. Thus, people returned to the communities surrounding the Trail for a completely different reason.

Yet, the cornerstone of MacKaye’s plan — “An Appalachian Trail” — became one of the most successful private/public projects in history. Why? Because it caught people’s imaginations from the beginning. Like JFK’s challenge to put a man on the moon, building a 2,000-mile trail through 14 states was bold and just enough unlikely to get done to make Myron Avery and scores of others want to be a part of making it a reality. Almost 100 years since MacKaye’s idea went public, the story of why and how it got built and the personalities of the two men most responsible hold remarkable insights for us all.