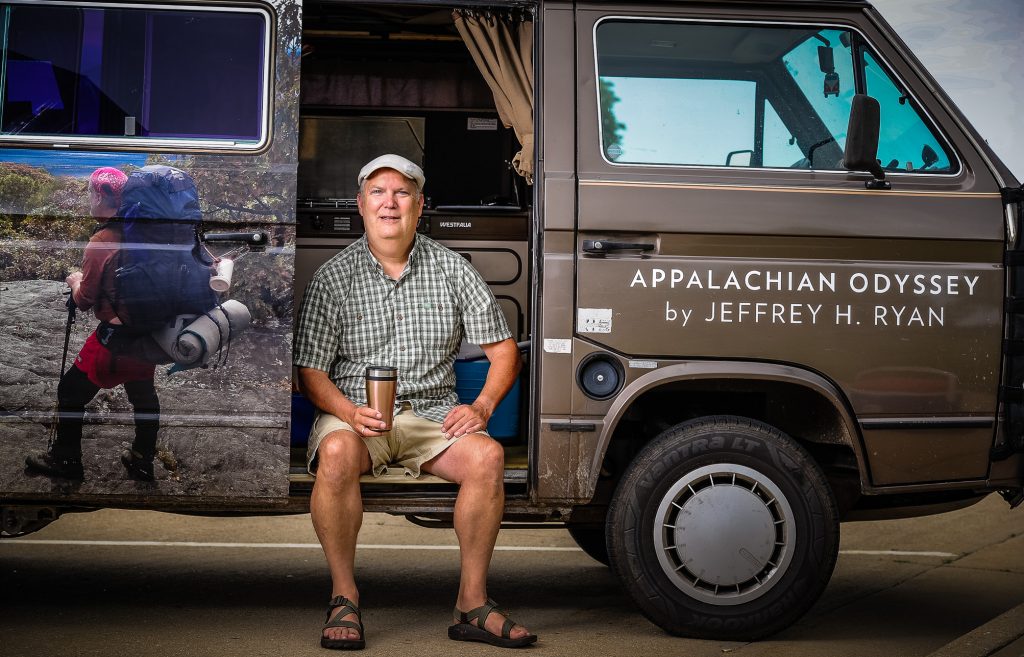 Jeffrey H Ryan is an author, adventurer, photographer, and historian. He has written several books about his outdoor exploits, his fascination with hiking trails and the people and places found just off the beaten path. His debut book, Appalachian Odyssey: A 28-year hike on America’s trail (published by Down East Books in 2016), was hailed by the former Executive Editor of National Geographic as “a classic of nature and travel writing” and set off a national tour (in a 1985 VW camper, no less).

His books are known for weaving a deep appreciation for history into walks across contemporary landscapes that give readers the feeling they are hiking right alongside. When Jeff isn’t trekking, chasing down a great story, or spinning yarns from his keyboard, he enjoys sharing his adventures with audiences who love the outdoors. He spends much of his time in his beloved native state of Maine.

In 1983, Jeff went on his first long-distance hike, a 6-month adventure on the Pacific Crest Trail (see photo above).

Upon his return to Maine from the PCT, Jeff kept right on trekking. He and a hiking partner climbed Maine’s highest 50 mountains in one year. He then began “section hiking” the Appalachian Trail with his friend Wayne Cyr in 1985 (the journey that would take 28 years to complete and would culminate in his first book.)

During his research for Appalachian Odyssey, Jeffrey became interested in the history of the AT, in particular, the two larger-than-life personalities most responsible for the Trail’s existence. This led to his second book, Blazing Ahead: Benton MacKaye, Myron Avery and the Rivalry that Built the Appalachian Trail, (published in 2017 by Appalachian Mountain Club Books). He continues to write about hiking adventures in an ever-expanding collection of books including Hermit: The Mysterious Life of Jim Whyte (released in 2019), and This Land was Saved for You and Me (released in 2022).

When he isn’t writing, researching, hiking or speaking at various venues, Jeff travels North America in his vintage 1985 VW camper.

*Did multiple sections of same trail in years marked with asterisk.